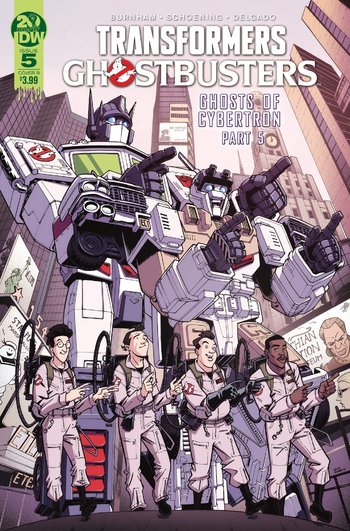 If there's something strange in your neighborhood, who you gonna call? Why, the Autobots of course!
Advertisement:

Transformers/Ghostbusters is a five-issue Ghostbusters (IDW Comics) Crossover limited series by IDW Publishing in 2019, designed to celebrate the joint 35th anniversary of the Ghostbusters and Transformers franchises. Teaming up the Ghostbusters with a version of Transformers mostly inspired by the original 1984 cartoon, the story starts off similar enough to what fans expect of the Robots in Disguise; the war for Cybertron is over, and the Autobots have no choice but to flee. They escape onboard their spacecraft, The Ark, where normally, the Decepticons pursued them on their ship, The Nemesis, where they'd fight in space and end up being stranded on Earth for millions of years before being reawakened in 1984 to fight their war once more.

Only this time, the Decepticons never got a chance to follow.

A mysterious elder god named Gozer has arrived to destroy Cybertron, and it ultimately does just that. The Autobots instead take to the cosmos for the next million years, unable to return home. It's only when the ship's resident theoretical physicist, Ectronymus Diamatron, detects a Cybertronian signal on Earth that he's given Optimus Prime's permission to investigate. Arriving on Earth, his presence coincides with New York's resident paranormal hunters, the Ghostbusters, dealing with another job. One bagged ghost later, and the boys in beige are prepared to head home. Only problem is their iconic car, the Ecto-1, is literally in the ground. Or is it? It's right next to the hole where the other is! But which one is real? It's from there that Ectotron reveals himself... and a familiar looking ghost joins the fray.

The series is produced the Ghostbusters comics' regular staff: Erik Burhman as writer, with art by Dan Schoening and Luis Antonio Delgado.