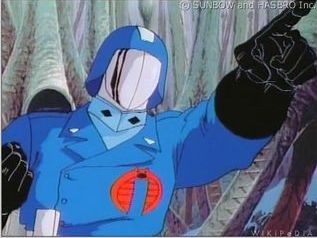 People of TV Tropes, I am Cobra Commander, president of Cobra Island and leader of the mighty criminal empire known as COBRA. For years, I have pursued world domination, but despite my military prowess and limitless resources, I have time and again met defeat at the hands of the GI Joes thanks to the MORONS who dare to call themselves my subordinates.

YES, THAT GOES FOR YOU TOO, MINDBENDER! Unless you’d like to try making a better Commander again, you can quit trying blame ME for YOUR MISTAKES!

My glorious career began as a car salesman who lost everything and went insane, or maybe as the Baroness’s younger brother—THAT HAPPENED, BARONESS. YOU CAN STOP LOOKING SO DEPRESSED—or perhaps as a nobleman from an ancient race of snake people sent to take over the world after a lab accident disfigured me…

Through years of hard work, I founded COBRA and began my efforts to bring the world to its knees.

Now that I am done here, you shall be loyal to me, you shall read thisssss page—
You Fool!!! No one will read a page with so few tropes here! They'll flock to the Joes' page and make you look like an idiot in their eyes while you do nothing about it!!!
NOT NOW DESTRO! But if they try, I shall— wait, you gave me an idea, Destro! I'll get my men to raid that page and deface the Joes' character folders! TROOPS! You shall make an account on this scummy website each and deface the Joes' character folders! FOR COOOOBRRRAAAAAAAAAA!!!!!
COBRAAAAAAAAAAAAA!!!!!