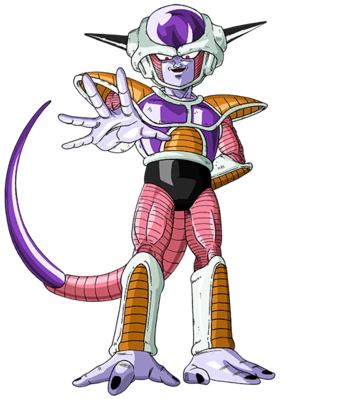 Like what you see? Just to warn you, this isn't even my final form.
"I doubt I need an introduction, but just in case, I am the mighty Frieza, and yes, all the horrible stories you've heard are true."
— According to most historical texts, this was indeed spoken by me. Of course, I don't recall ever saying such a line, but it does describe me quite aptly.
Advertisement:

Ohohohohoho! I see we have a new planet for me to conquer! You should feel lucky; letting you lowlifes live was my sole act of mercy. Besides, I may have a use for you in my army.

You probably don't even know who I am. Then let me introduce myself: My name is Freeza (though some have spelled that as "Frieza;" I can't imagine why), and I'm quite the renowned figure among the cosmos. Tell me, have you ever heard of the Planet Vegeta? Its population was growing a little bit too strong for their own good, so I wiped them out entirely. No one even knows the planet exists anymore, and I doubt anyone will remember yours if worst comes to worst.

Of course, let's not get ahead of ourselves. After all, what profit is there in a destroyed planet? You see, I run a rather successful business within the empire known as the Planet Trade. Entire worlds offered to the highest bidder, and I can personally guarantee that all indigenous sapient life will be eradicated before the ink dries. Though, back on the topic of Planet Vegeta.

Unfortunately, genocide isn't always a foolproof option. A sole member of the planet's species, the Saiyans, survived. I had attempted to destroy the so-called Super Saiyan before he could even come into existence. Unfortunately, not only did I have to deal with one, but another one showed up on this planet, too! And supposedly their numbers are multiplying?! INCONCEIVABLE! Why did I ever allow those filthy apes to survive even in smaller numbers?!

It doesn't matter. Even if I died before, I've simply been revived with the Dragon Balls. And now, I assure you that when the Super Saiyan does arrive, then I shall personally eliminate them. I happen to have been training in hell for some time. This time won't be like last time.

If you're looking for media portrayals of me, I found Ryūsei Nakao, Chris Ayres, and the latter's understudy Daman Mills to be quite capable. Pauline Newstone and Linda Young, however, have failed to understand that I am simply not female. If you're a Latin-American Spanish-speaking person, Gerardo Reyero is the one tasked with rendering me to your language. And despite the humorous changes to my character, I've found LittleKuriboh does a good job for the internet audience. Sometimes I privately find myself adopting traits of his style. I can't help it if they're so amusing.

Oh, what's this? So apparently that foolish prince has his own page! Huh, the elusive, dangerous dunce Majin Buu as well? How quaint. And although I have no idea who...that...black man is, he seems oddly familiarnote I have been informed he used to be Dumplin; no wonder he seemed familiar. But don't you worry, by the time I'm done with all of them, I'll send them home crying. Like a little...bitch.note Whatever you say, bitch.

I suppose you'd like to know more about me. Very well, I'll indulge you.

Well, I believe we have more pressing concerns to which to attend. I believe your planet has artifacts called Dragon Balls, seven in total, that when brought together are able to grant any wish, including immortality.

Are you going to hand them to me, or do things have to get messy?