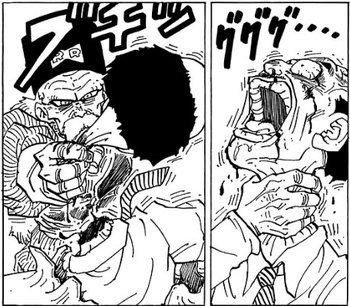 Talk about a Cruel and Unusual Death.
Advertisement:

As the Darker and Edgier Sequel Series of Dragon Ball, Dragon Ball Z has some of the vilest villains in anime, and that's not even getting into the traumatic past of Trunks, the excessive violence or even some traits of the good guys. This may be a series where Death Is Cheap, but that doesn't diminish how scary it can get.

The Return of Cooler

The History of Trunks

Plan to Eradicate the Saiyans

Battle of the Gods