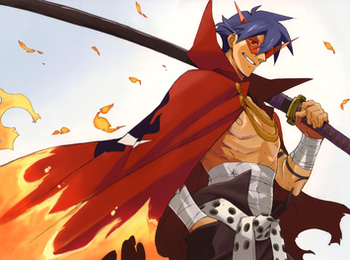 Hey! HEY! HEY! HEY! HEY! HEY! HEY! HEY! You got guts navigating to my page unannounced. But I like guts, both the word and that one guy from that really dark Japanese comic book. You don't need to say anything. I know exactly why you're here. You're here to hear about the undisputed leader of Team Dai-Gurren, the manliest, most tenacious man in the known galaxy and all of the multiverse, THE MIGHTY KAMINA!

What's that? Some of you reading this don't know who I am? Well then, dig the wax out of your ears and listen close. The reputation of Team Dai-Gurren goes far and wide. When people talk about its badass leader, the man of indomitable spirit and masculinity, they're talking about me, THE MIGHTY KAMINA!

What do you mean I just repeated myself? Hey! Hey! Hey! Just who the hell do you think I am? This is my page and I get to make the rules here see! Now sit back, relax and listen real close as I tell you the story of the greatest hero that EVER LIIIIIIVED!

To start, I'm from that one anime. You know the one that created the phrase Beyond the Impossible. What? Not ringing a bell. MUST I SPELL IT OUT FOR YOU? I'm from Tengen Toppa Gurren Lagann! Can't you tell from my Badass Cape, awesome blue hair, awesome sunglasses and kickass sword? You can't! Well then, LOOKS LIKE I BETTER START AT THE BEGINNING!

Years ago I ventured onto the surface world with my old man, but back then I was too scared to go where no man has gone before, so my old man sent me back to my home village in Jiha. I spent years trying to convince the village chief that there was a world above the ceiling to the underground village, but he wouldn't believe me. Can you believe that? How could he doubt the mighty Kamina?

Well, anyway, after many years and zany schemes trying to break out onto the surface, fate smiled upon me. First, I met this really smoking hot sniper babe, Yoko, let me tell you with melons like that it was Love at First Sight for this great epic specimen of manliness. Oh, and I guess a giant robot dropped down and tried to terrorize the village, but that's not nearly as important. I mean, I could've beaten it with just the village chief's sword and my manly spirit. No, seriously, I totally could have.

Unfortunately, I didn't get to show the village, or Simon and Yoko, how manly I am and...what? Who's Simon? Ah, how could I forget to mention Simon, my blood brother! Simon is from Jiha Village, just like me. When his parents died in an earthquake, Simon was left all alone, but then I came along and took him under my wing, guiding him and mentoring him so that he would one day become a badass pinnacle of manliness just like me, which he definitely did, though it took him a little while. But anyway, enough about Simon for now. This is my page, so right now, we're gonna talk about me! IT'S MY TIME TO SHINE!

Anyway, long story short, Simon and Yoko helped me bust out onto the surface world where we were all thrust into battle against beastmen and their Gunmen. I totally jacked me one of them and named it Gurren, pairing it off with Simon's tinier Gunman, Lagann. Together we formed the greatest giant fighting robot that ever existed, the Gurren Lagann. Aw, yeah, baby!

With our Combining Mecha and manly spirit, Simon and I were unstoppable! Well, at least until around the time we fought some monkey dude. See, as the human resistance, led by yours truly, started gaining momentum we took on a giant fortress called Dai Gunzan. Since Simon's Lagann can fuse with other mecha and take control of them I came up with this brilliant plan to have him take control of the enemy's main base. And while the plan worked in the end, during the battle, I sort of... well... died. But luckily, not long after my demise, Simon's manly soul finally awakened, and he took up my mantle and finished what we started!

But that's not where my story ends! Death means nothing to this man! A true man never dies, even if he is killed! When Simon and the others were in danger, trapped by some creepy shadow dude's weird hypno spell thingy, I was able to briefly return and speak to Simon one last time, allowing him and everyone else to break free from the trap and finish things once and for all. And while I can't go back to my world, I totally get to chillax wherever I wanna these days. And hey, this internet is a pretty cool place if you ask me. I'm totally going to make a new Team Dai-Gurren. Let's see, maybe I'll send out some invitations to some of those other guys with pages on this website.

Hmm, suppose that'll do for now! Now that I have my new Team Dai-Gurren, I feel hyped enough to tell you more about me and what makes me as manly as I am. So here you go, troper!

THESE TROPES ARE THE TROPES THAT WILL PIERCE THE HEAVENS!

Well, it looks like that's all I've got. Remember troper, if you can't believe in yourself, believe in the Kamina that believes in you. Just who the hell do you think you are? Shut up, I'm not crying! Your life is worth more than wandering aimlessly about this website for the rest of your life. Now go on out of there and make something of yourself! The GREAT KAMINA DEMANDS IT!