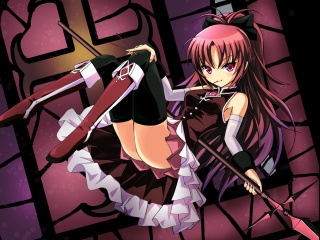 "Witches eat weak humans. And in turn, we eat those witches. It's the basic rule of this world."
Advertisement:

(This page is best read in Ai Nonaka's or Lauren Landa's voice.)

...What? You're here to ask me about me? Hmph! Why the hell should I tell you about things I don't want you to hear? *crack* *munch*

So you're a fan of that Madoka show that I'm from starrin' that rookie Sayaka's pinkheaded friend? Wait, you're watching that show for Homura and not for ME?! Well, I do respect her, but I don't get why you're findin' her more cool and badass than yours truly. After all, I'm the only one who does things right in this world when it comes to being a magical girl. *crunch crunch*

Huh? What's this? I actually have FANS? Fans who actually love me for being who I am? And what I end up doing eventually?

*stops eating for a second*

...Okay, if you really want to hear about me, I'll tell you, but make it quick. I'm a veteran magical girl, but I don't do what I do to help others. The only way I do things is to help myself. Like when I told that rookie Sayaka that it's best to let a familiar eat a few more humans to become a witch so you can get a Grief Seed from slaying it. And I do have a good reason for this, but I don't feel like telling you right now. And don't you ask! Or if you really do care about me enough to find out, then you'd read the rest of the page and highlight all the spoilers. But don't do it until you've finished watching the show! Or I WILL kill you.

My weapon is a halberd that can separate into chained-together segments. Best thing for slaying witches with, since it's got range and flexibility too, and doubles as a chain-rope-thing that I can trap things with. *snarf*

So there's my past, but I already told you what I think of tellin' you that. If you're nice enough to me, I'll letcha read on. Anyway, I made a contract with Kyubey to become a magical girl. (You'll find out why). I go around town slaying witches just because I can, mostly to collect their Grief Seeds. Then one day, some rookie magical girl Sayaka started infringin' on my territory (which I inherited from my old friend Mami), and everything changed from there. (Again.) So I meet Sayaka and her pinkheaded friend and fight them to the death, until I actually do kill her, somehow. And then Kyubey reveals the truth - magical girls are just zombies, basically. So, as a zombie, I try to make the most of my life, once again. I start helping Homura and the others, helping to plan an attack on Walpurgisnacht and stuff. Then I watch poor Sayaka break down, until finally, she becomes even more of a wreck than I was and turns into a witch. I have no choice then but to protect Homura and pinkhead (who I now befriend and know as Madoka), and sacrifice myself to go down with Sayaka. But I'm Back from the Dead after Madoka saves the day by wishing all witches out of existence, fightin' wraiths like nobody's business alongside Homura and Mami.

In Puella Magi Madoka Magica the Movie: Rebellion, I'm back. And I go to school or somethin'. It's because I become trapped in some dream world that Homura thought up where we sappily fight as the "Puella Magi Holy Quintet" or some shit like that like some moeshit Sailor Moon show. Here, I think I'm livin' a normal happy life, but it turns out that we're trapped in Homura's witch labyrinth and Mami and I got brainwashed, something (to my credit) I helped her to find out. On the plus side, I'm livin' with Sayaka... Not that I enjoy it or anything!

There's also that spinoff manga where I don't appear much, but you don't really care about that, do you? What you do care about is that other spinoff with my apprentice, Yuma Chitose. Mami and I appear a lot more in that one, and I get to show my softer side and take in Yuma as her guardian, just like I did with my sister before that nasty shit happened. And there's that ''other'' spinoff, where yours truly gets to have another chance with my old sempai Mami. It doesn't end well.

*munch* So what are you here for, huh? The tropes? Okay, here they are. The page is still a work in progress, so you can add your own, but make sure they don't say anything bad about me! Except if they're about things I want to leave behind.

*hands you an apple*
Want one?

And oh yeah, don't you dare confuse me with that German girl who thinks she's so much better than me with her giant robot and crap! You say that I remind a lot of people about her? Who the hell cares?! *munch*

Here are my tropes, dumbass:

*grabs the apple you just accidentally dropped and lifts you by the neck*
You waste food, I kill you. Now go away and read about Puella Magi Madoka Magica.