Self Demonstrating / The Incredible Hulk 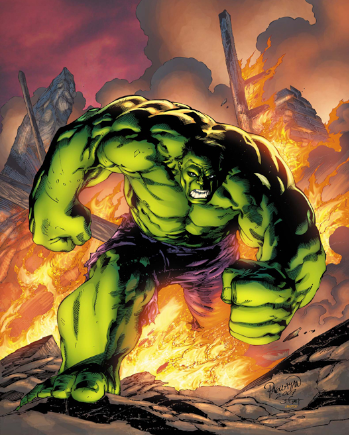 PUNY BANNER ANGRY!!!! TURN INTO HULK!!! YOU NO LIKE!!!!
"HULK SMASH!"
— Hulk
(This page is best read in the voices of either Lou Ferrigno or Fred Tatasciore for the Hulk's various incarnations, and either Bill Bixby, Eric Bana, Edward Norton, Mark Ruffalo, Neal McDonough, Gabriel Mann or Troy Baker for Banner.)
Advertisement:

INCREDIBLE HULK IS COMIC CHARACTER!!! FIRST APPEAR IN PUNY MARVEL'S "Incredible Hulk" Vol. 1 #1 (May, 1962), CREATED BY SUNGLASSES COMIC MAN AND PINK PUFFBALL MAN!!! AT FIRST NO ONE LIKE HULK, HIS SERIES CANCELED AT #6 (March, 1963)!!! AFTER THAT OTHER SERIES USE HULK AS GUEST STAR FOR NEXT FEW YEARS. HULK GET SECOND CHANCE IN PUNY SERIES "Tales to Astonish". HULK FEATURE THERE FOR #60-101 (October, 1964-March, 1968). THEN IT GET NEW NAME AFTER HULK! IT CALLED: "Incredible Hulk" vol. 2. HULK APPEAR IN PUNY ISSUES #102-474 (April, 1968-March, 1999). HULK ALSO STAR IN PUNY SHORT-LIVED TITLES AFTER! HULK BECOME ONE OF PUNY MARVEL'S MOST FAMOUS CHARACTERS, NO ONE EVER FORGET ABOUT HULK! GRRRRAAAAAAAAAHHHHHHHHHHHHH!!!!!!

Translation The Incredible Hulk is a comic book character who first appeared in Marvel's Incredible Hulk Vol. #1, in May 1962, created by Stan Lee and Jack Kirby. Unfortunately, the Incredible Hulk was at first rather unpopular, with his first series being canceled after issue #6. However, the Incredible Hulk made several guest appearances in other comics over the next years, and eventually returned as a main character in Tales to Astonish. Hulk featured in these comics from issue #60 (October 1964) to issue #101 (March 1968), until the series was named after him, the so-called Incredible Hulk Vol. #2. Hulk has appeared in every issue since #102 until #474 (that's April 1968 until March 1999). The Hulk also made a number of appearances in some short-lived titles, establishing himself as one of Marvel's most popular characters.
Advertisement:

YOU NOT LIKE HULK WHEN HULK ANGRY! ANGRIER HULK GET, STRONGER HULK GET! HULK WAS PUNY BRUCE BANNER, BUT BANNER GET HIT BY GAMMA RAYS AND TURN INTO HULK WHEN PUNY BANNER GET MAD!

Translation The Incredible Hulk was originally a man named Bruce Banner, until he was exposed to gamma radiation. Now, moments of anger trigger a transformation into the Incredible Hulk, a (usually) green-skinned monstruosity who possesses Super Strength and Nigh-Invulnerability.

HULK GET IN MANY FIGHTS AND SMASH LOTS OF THINGS! BUT MOST PEOPLE HULK BEATS UP DESERVE BEAT UP OR ANNOY HULK! HULK NOT WANT TO MAKE TROUBLE, BUT WORLD CAUSE LOTS OF TROUBLE FOR HULK! MAKE HULK ANGRY! GRAAAAAAAAAHHHHHHHHHHHHHHH!!!!!

Translation Bruce does the best he can to prevent transformations into the Hulk and generally wishes to be left to his own devices; however, there are always entities who just don't get the hint, which leads to Bruce Hulking Out. Hulk's brutal rampages are generally highly destructive and frightening to behold, but due to the nature of his trigger, more often than not, the targets of Hulk's violence provoke it.
Advertisement:

HULK NOT USUALLY HELP PEOPLE, BUT HULK LIKE TO HELP HULK'S FRIENDS! HULK HELP THEM DO GOOD BECAUSE HULK IS STRONGEST!

Translation Bruce/The Hulk is usually considered a Heroic Neutral. He doesn't get involved with conflicts surrounding him unless they target himself or people he cares about, in which case, run.

IN MARVEL UNIVERSE, HULK IS STRONGEST THERE IS!, EVEN STRONGER THAN PUNY GOD WITH HAMMER! HULK STRONGER THAN EVERYONE IN PUNY DC UNIVERSE TOO!!!! ONLY ONE WHO COME CLOSE IS PUNY RED CAPE MAN IN CROSSOVER STORIES. RED CAPE MAN MAKE HULK ANGRY! HULK RIP OFF RED CAPE MAN'S HEAD!!!!!!

Translation In the Marvel universe, the Incredible Hulk has been demonstrated to be one of its most powerful denizens, if not the strongest. He has defeated The Mighty Thor, as well as Superman in Crossover stories with DC Comics.

HERE ARE OTHER THINGS THAT HULK CAN DO!

Translation Although his Super Strength is his most obvious power, the Hulk also possesses a Healing Factor, resistance to psychic powers (including telepathy), and the ability to see ghosts and apparitions. However, one of his more interesting abilities is his ability to to sense the location of his original transformation anywhere in the world. Also, while not a power from Hulk himself, Bruce Banner is the world's leading expert on nuclear radiation, to the point where he surpasses Iron Man and Doctor Doom in this field.
HULK BECOME DIFFERENT PERSON A LOT! HERE ARE DIFFERENT PEOPLE THAT HULK BECOME!

WHEN HULK MAD, ONLY FEW CAN STOP HULK SMASHING EVERYTHING! PRETTY LADY, LITTLE GUY WHO KNOWS WHO HULK IS AND GREEN GIRLY HULK CAN HUG HULK TO STOP HIM SMASHING! ONLY ONES THAT CAN! BUT STUPID SOLDIER MAN KEEPS ATTACKING HULK WHILE STILL HULK! GIVE HULK PAIN! SO MUCH PAIN!! THIS MAKES HULK MAD AGAIN! RRAAAGH! THIS WAS NAMED AFTER HULK ONE TIME BEFORE BUT NOW NOT! STUPID COMPUTER PEOPLE CHANGE NAME! RAAAAGH! THIS MAKES HULK MAD! HULK NOT LIKE STUPID COMPUTER PEOPLE WITH BIG FANCY WORD AND STUPID CHANGE NAME!!!!! HULK BEST ONE THERE IS!!!! HULK SMASH!

HULK SEES IMPOSTORS WHEN HE SMASHES! RED FIREY HULK THINK HE THE STRONGEST HULK. HE THINK HE COULD SMASH HULK! BUT HULK IS STRONGEST ALWAYS AND EVER!!! RED GIRLY HULK [Bruce Banner: You mean my love, Betty Ross.] MAY BE NOT LIKE HULK BUT SHE MAKE HULK FEEL GOOD!!! [Mr. Fixit: Wish I could see that.]

PUNY PETER DAVID MADE MORE HULKS FOR BRUCE BANNER! DADDY DAVID MADE FIXIT, PROFESSOR, AND WORLDBREAKER FOR HULK TO SMASH WITH! BUT HULK DON'T KNOW WHERE THEY ARE!!! GRAHHHHHHHHHHHHH!!!

IN SEVENTIES, PUNY TV PEOPLE MAKE TV SHOW ABOUT HULK! PUNY BIXBY PLAYED PUNY BANNER! LOU FERRIGNO HAD AWESOME MULLET AS HULK! BUT THEY MAKE HULK WEAK! AND NOT LET HIM TALK! PLUS, PUNY BANNER WAS CALLED "DAVID" AND INSTEAD OF ARMY, HULK WAS CHASED BY PUNY REPORTER CALLED "MCGEE!" BUT PUNY HUMANS LIKED SHOW ANYWAY AND IS CONSIDERED ONE OF BEST SUPERHEROES SHOWS EVER!!!

IN EIGHTIES AND NINETIES PUNY TV PEOPLE MAKE CARTOON TV SHOWS ABOUT HULK! FIRST WAS TOLD BY SUNGLASSES COMIC MAN AND PUNY BANNER SOMEHOW GETS ALL CLOTHES BACK WHEN HE COMES BACK! SECOND WAS BETTER WITH FERRIGNO AS HULK'S VOICE!

IN NEXT DECADE, PUNY HUMANS MAKE MOVIE OF HULK BY CROUCHING TIGER MAN WITH PUNY BANA AS HULK BUT HUMANS DID NOT LIKE. HURT HULK VERY MUCH!! HULK BEST ONE THERE IS!!!!! HOWEVER, HULK WAS ADAPTED INTO ELECTRONICS ALSO FEATURING BANA. HULK NOT BOTHERED AS MUCH. HUMANS TRY AGAIN LATER WITH PUNY NORTON, BUT HUMANS NOT LIKE MUCH BETTER, DAMNIT! BUT THEN BUFFY MAN PUT HULK IN THE AVENGERS WITH PUNY RUFFALO AND THE HUMANS LIKE! ESPECIALLY WHEN STUPID FLAGMAN TOLD HULK TO SMASH! OR WHEN HULK SMASH PUNY GOD!! WITH HELP OF OTHER AVENGERS HULK SMASH PUNY BOX OFFICE IN 2012, EVEN MORE THAN PUNY BLACK CAPE MAN!!!!! IN METAL MAN MOVIE 3, PUNY BANNER APPEAR AFTER CREDITS TO LISTEN TO BORING METAL MAN'S STORIES, WHICH IS GOOD BECAUSE HULK NO HAVE TO LISTEN, ONLY PUNY BANNER!!! HULK RETURNED IN AGE OF ULTRON! PUNY BANNER SAW SOME GOOD - PRETTY RUSSIAN CHICK LIKES HIM! BUT HULK ONLY LIKE BETTY!!! - AND SOME BAD - METAL MAN USED HELP OF PUNY BANNER TO CREATE EVIL ROBOT FROM TITLE! HULK TOO - MAGIC GIRL MAKE HULK CRAZY, METAL MAN PUNCHED HULK TO SLEEP! BUT HULK SMASHED AS MUCH OF EVIL ROBOT AS POSSIBLE! HULK RETURN IN HAMMER MAN 3, WHERE HULK FIGHTS IN RING LIKE GREEN SCAR, TALKS A LOT, TEAMS UP WITH HAMMER MAN AND ANGRY GIRL, AND THEN SMASHES PUNY BIG WOLF! HULK WAS THEN IN INFINITY WAR, WHERE HE FIGHT BIG PURPLE MAN AND LOST. HULK REFUSES TO FIGHT HIM AGAIN! HULK WOULD CRUSH HIM TOO HARD! HULK NOT AFRAID OF THANOS, HULK SICK OF PUNY BANNER ONLY MAKING HULK FIGHT! HULK NOT JUST WANT TO FIGHT, HULK WANT TO BE ALONE! SMASH NOT WORK NOW, SO HULK GO AWAY! GOOD LUCK BANNER. HULK WAIT UNTIL NEXT AVENGERS! [Bruce Banner: So yeah. I basically warned Tony, Strange and Wong that Thanos was coming to gather the rest of the stones, and had to hide since he refused to come out. I had to seek out Steve and the Vision, alongside Romanoff, Rhodes, and Maximoff. We all agreed to head to Wakanda to allow Shuri to destroy the Mind Stone without killing Vision but then he came. Even now he refused to come out so I used one of Tony's hulkbuster armors to engage with Thanos (even killing Obsidian by sacrificing one of the arms) but then he trapped me in some rocks and killed half the universe before escaping. I was mortified that I also couldn't do anything to Thanos either. Even after going after Thanos on his retirement planet to undo the damage only to see he made it irreversible caused me to realize that if neither he nor I could take on Thanos separately, then maybe we should merge so that it would be a lot easier to deal with such a case.]
[The Professor: And this is where I come in. After talking out our differences during the five year gap, we ultimately found a way to become a single being. This incarnation is based on The Professor persona and Nerd Hulk from The Ultimates. I have Banner's genius and the Hulk's brawn, though it's slightly Nerfed as I lack the raw strength and healing factor of the Savage persona, which is a problem when you're about to use the Infinity Gauntlet to undo Thanos' damage inflicted upon the universe and causing me to not be as helpful for the final battle on Earth. So much that when I checked on Shang Chi's rings, I still have a sling on my arm.]

HULK ALSO APPEAR IN MANY VIDEO GAMES INCLUDING THAT ONE WHERE HULK AND OTHER HEROES FIGHT KARATE MAN AND HIS FRIENDS [Professor: I did most of the smashing in Marvel Super Heroes, Marvel Super Heroes vs Street Fighter, Marvel vs Capcom and Marvel vs Capcom 2, then my Savage self took over in 3 and its update.] [Mr. Fixit: I still feel cheated those geeks at Capcom didn't put me in as DLC. And no palette swaps don't count. I finally got one in Infinite but that was a dead game walking.] THOUGH HULK UPSET THAT LITTLE ROBOT MAN AND LITTLE ROBOT GIRL DID NOT APPEAR IN THIRD GAME BUT ROBOT WITH BEAM SWORD TAKE THEIR PLACE. HULK FIND IT FUNNY THAT SHADES MAN THINK HE GOD BECAUSE HE DRANK KNOCKOFF OF FLAGMAN'S TONIC.[Professor: A fact I find highly amusing. Wesker is just being unoriginal and cutting corners.] HULK NOW READY FOR NEW GAME SO HULK CAN JOIN FLAGMAN, METAL MAN AND SPACE LADY TO TAKE ON KARATE MAN, GOTH GIRL, AND NEW ROBOT MAN WHO THEY SAY IS SWORD ROBOT'S PARTNER! ALSO THEY BRING BACK MAGIC SPACE ROCKS! [Professor: You mean the Infinity Gems, though for some odd, inane reason they're called Infinity Stones.] ALSO THEY MAKE REAL STORY THIS TIME WITH EVIL ROBOT TEAMING UP WITH OTHER EVIL BALD SWORD ROBOT AND USE SPACE ROCKS TO BECOME SUPER EVIL ROBOT! BUT HULK NOT AFRAID! HULK HELP NEW ROBOT MAN SMASH SUPER EVIL ROBOT! HULK ALSO APPEAR IN AVENGERS GAME, WHERE HULK AND BANNER TEAM UP WITH STRETCHY GIRL TO HELP REFORM AVENGERS AFTER ACCIDENT!

HULK HAVE OWN VIDEO GAMES, BUT BEST OWN GAME ONE WHERE ONLY USE HULK AND SMASH THINGS. PEOPLE LIKE GAME, BREAK RULE ABOUT LICENSED GAME BEING BAD. ALSO FIRST TIME TATASCIORE VOICE HULK.

HULK ALSO HAVE OWN COASTER AT ISLAND PARK.

This guy's louder than Bob in the bathroom when he eats chimichangas for dinner. And believe me, buddy. He can't seem to hit the right note everytime.