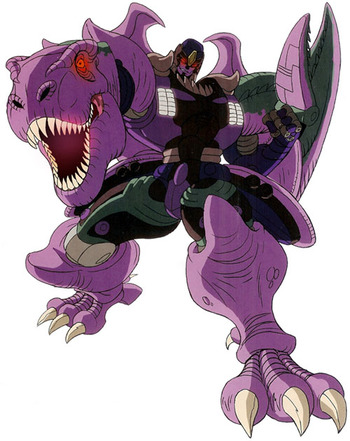 I am that which is, which was, and is yet to come! And you will know my name is Megatron when I lay my vengeance upon you!

For best effect, read in the voice of the silky sweet tones of David Kaye...OR ELSE!

Truly, Starscream, you thought you would be the only Cybertronian whose presence would grace this unholy website? You'll find that I make for a far more interesting subject. Yeeeees.

And now, primitive lifeforms, perhaps it would be wise to indulge you as to my identity. All know me as Megatron. No, not that one, and not the professional sports player of your primitives who identifies himself as Megatron. Ironic as it would seem, I took the name after a far more ancient being. But much of my past will remain shrouded in mystery. It adds a nicer effect to it, wouldn't you say? What I will say is that I used to be a simple thief, until I ended up under the wing of a criminal named Cryotek. Like me, he took the Maximal rule of Cybertron following the Autobots' victory in the Great War to be an insult to the Predacons who were left struggling as second-class citizens. He had hoped to steal a device that contained a message from my namesake, planning to alter history by killing Optimus Prime as he lay in stasis onboard The Ark and change history in the Decepticons' favor. Naturally, I knew he would betray me, so I betrayed him first. With a small crew of Predacons who agreed my methods of eliminating the Maximals were far quicker and more efficient, I set out to prehistoric Earth, in the hopes I could fool all into thinking that I sought Energon deposits. Unfortunately, those Maximal scum followed me and caused us both to crash. The planet's high amount of radiation led us to adopt organic forms to survive, with myself becoming a Tyrannosaurus Rex. The Maximals' leader Optimus Primal did the same to his troops, and thus began the Beast Wars!

For many months, I fought hard to ensure victory, but the Maximals always ended up with the upper hand (not to mention my minions constantly backstabbing me, and left me with a difficult path in the war. The constant betrayals of Terrosaur, the many manipulations of Tarantulas, the annoyance of being referred to as Queen by Inferno...far too much incompetence in my ranks. Perhaps I should try to employ more competent minions. But eventually, the battles forced me to enact my ultimate plan, for no other path was presented to me.

Oh? You thought I was going to kill Optimus Prime? Foolish organics. That was but a trick to lower your guard. The truth is, I was planning to force you pathetic lower life forms to worship me via this page. I don't intend to deliver any sort of sad tale of woe; no. Instead, I have fooled you into reading everything about me. Now, as I have you trapped in my grip, you are now required to take in the details of my glorious life. You cannot back out. You cannot escape. All you can do is suffer... yeeeeees.

So, you did manage to read me entire page? It would seem I underestimated you. But no matter. Soon, the Beast Wars will be over, and I will have destroyed all of the pathetic Maximals beneath my heel! Now onward my troops... to victory!