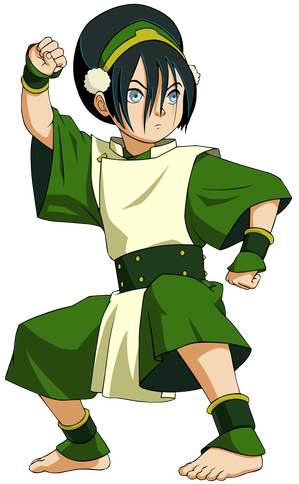 Alright, I got someone to take over the typing bit. I was starting to worry you'd actually make me do the whole page.

So anyway. You cannot be serious. You just can't. You give a falcon-themed race car driver his own, you give a sociopathic little boy his own, you even give an evil talking monkey his own, and yet it took you this much time to give me my own Self-Demonstrating page on TV Tropes?! I'm shocked, I tell you. Shocked!!

Sigh. Anyway, introduction time. I'm Toph Beifong, one of the many female characters on the hit animated series, Avatar: The Last Airbender. If you don't know what happens in it, I'll tell you. Ahem...it mainly takes place in a world where most of the people have developed the incredible skill of bending, which enables us to combine our fighting styles and spiritual energy together to control the legendary four elements: water, earth, fire, and air. Together many people and benders alike made nations that fit their respective element. They are, in this order; the Water Tribe, the Earth Kingdom, the Fire Nation, and the Air Nomads. A long time ago, all four of these nations lived together in peace and harmony. But sadly everything changed for the worse when the Fire Nation attacked. Only the Avatar, the only one able to master all four of the elements, could take care of them. Unfortunately for all of us, when the world needed him most, he just vanished, and we were just left to be sitting ducks. Because of this, a massive war took all the peace and strangled it like it was just a mere throat in the millions of people that we lost fighting it. The biggest casualty has to have been the Air Nomads, since Fire Lord Sozin launched an attack that left the Nomads a little worse for the wear. About a hundred years of this war has been going on, and many fear that the Avatar's cycle of reincarnation was broken. But one day, Katara and Sokka, two Water Tribe siblings, found the new Avatar; an airbender, and by extension, the last airbender. The airbender's name is Aang, and while he is an amazing airbender, he has to learn the other elements before he can save the world. Now that you're caught on what the show is about, now it's time to tell you who I am. I'm a young girl who is one of the members of Team Avatar, a group of young heroes that have dedicated their summer, and by extension, their lives, to save the world from the clutches of the evil Fire Nation's rule. I'm Aang's earthbending teacher, as well as the team's only earthbender. Here's a description of who I am in just one little sentence:

I am the greatest earthbender in the world!!

I know that sounds egocentric at first, but trust me, I can prove it in about a second. Anyway, if you want my life story, you're gonna hafta either watch the show or read on. I'll be honest, I got a lot done with Aang and his friends. I held my own in battle, wriggled my toes in the grass (which might have been fur), heck, I even invented metalbending, which no one in the entire world had done. So yeah, I am an invaluable part of Team Avatar, and if it wasn't for me, Aang would've never learned earthbending, the world would've been doomed, and I wouldn't have had the chance to show the world what I'm made of.

Anyway, I'm mainly voiced by the cute babyfaced little girl named Jessie Flower, which kinda contrasts with my rough and tumble exterior. I suggest you read all of this in her voice, since her voice is pretty much mine. Okay okay, I would eventually be voiced by Kate Higgins and Philece Sampler (Rest well in the Spirit World) in the sequel series, if you prefer me being bash as an adult that is. And once you're done, earthbend as far away from here as possible. Your life will be ruined if you don't.

And for crying out loud, please forget about the movie. Just watch the show. We all know how much of a trainwreck that was. I'm just glad I wasn't in it.