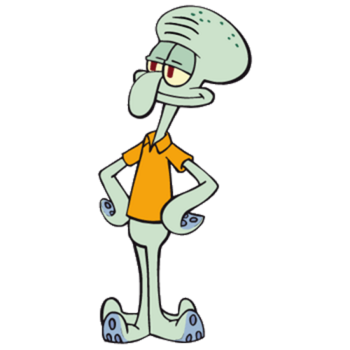 Pictured: Someone who really wishes he wasn't here right now.
"How did I ever get surrounded by such loser neighbors?"
— Me on my annoying, inconsiderate neighbors.
Advertisement:

Hello there. My name is Squidward Q. Tentacles, Bikini Bottom's resident artist, clarinet player, and Supreme Chef extraordinaire. My talents would probably be more recognized if it wasn't for my obnoxious next-door neighbors, SpongeBob and Patrick, and the fact that I'm forced to spend my weekdays trapped in the prison of high cholesterol that is the Krusty Krab. All I ever want in life is peace and quiet, but between being stuck at that cash register all day and forced to put up with that annoying sponge's overly cheerful attitude, getting my wish is never easy. Fortunately, even when he finally got his own page here, to my obvious misfortune, he still has to stay on it for the most part while I get to keep this one all to myself. Sucker! I got to admit, that's not so much compared to what I usually have to deal with.

Oh, and if that's not enough, that stuck-up snob Squilliam Fancyson always thinks he can be better than me by showing me up every chance he gets. Served him right when I put together that marching band and blew everyone away at the Bubble Bowl!

How about you read this in the voice of Rodger Bumpass, my incredibly talented voice actor? At least it'll be different from that French narrator who keeps butting in on my everyday life!

Artistically unique tropes that apply to me:

Whew, good thing that was one of the easier times I've told him. I think I'm gonna like this place just fine. You might as well leave too unless you have any other tropes to add. I heard there are things here that are more harmful to you than me.