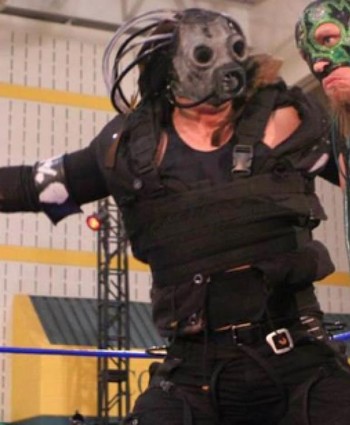 WAR CHANGES EVERYTHING. (That's Delirious on the right.)

Stephen Kingnote Not that one. is an American Professional Wrestler from Ames, IA best known for his time in CHIKARA in 2014 as Deucalion. He debuted in 2007 and wrestled for various Midwestern independent promotions. He arrived in CHIKARA at the return show, You Only Live Twice, on May 25, 2014 as Deucalion, the Big Bad of The Flood, the amalgamation of Heel groups out to destroy CHIKARA. After destroying several characters, including some of his own followers, CHIKARA Grand Champion

Icarus defeated him in a steel cage match at the Season Finale Tomorrow Never Dies on December 6th, and killed him off with The Estonian Thunderfrog's Hammer of Peace. He has continued wrestling ever since.

He is a former FLW (North Dakota) Heavyweight Champion

as "Chainsaw King" and a former 3XW (Iowa) Heavyweight Champion