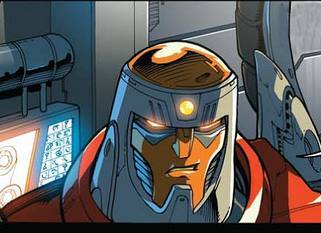 The second profile pic, commissioned after it was brought to the staff's attention that Warner Bros. held the rights to the likenesses used in the GoBots cartoon.
Advertisement:

This was possible because of Hasbro, the owners of the GoBots franchise's main competitor (and eventual surpasser) Transformers, obtaining the rights to GoBots when they acquired GoBots owner Tonka.

Renegade Rhetoric initially started as a guest column of the Ask Vector Prime Facebook page that ran from October 13-21, 2015, with the premise of Cy-Kill finding his way at Axiom Nexus in the Transformers: TransTech universe and eventually being forced to retreat back to his home dimension, but not without bringing along various Renegade recruits who were notably Toyline Exclusive Characters. After that, Renegade Rhetoric resumed on November 5 of that year as a separate Facebook page from Ask Vector Prime and continued making regular posts until February 5, 2016, afterwards the Facebook page temporarily shifted to a storyline about Wheeljack and the Spy Changers that ran from April 30 to July 14 before one final post on New Year's Eve 2016 where Cy-Kill returned to announce that he, Megatron and Magmar (leader of the evil faction of Rock Lords) had formed several plans to use against their enemies while providing a final farewell.