Film / The Other Side of Sunday 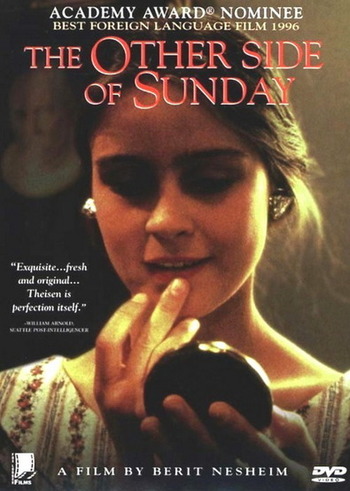 The Other Side of Sunday is a 1996 film from Norway, directed by Berit Nesheim.

Maria (Marie Thiessen) is a 16-year-old girl living in rural Norway in an indefinite time frame that appears to be the late 1950s. She's the daughter of the town minister, Johannes. While her father is a very strict religious fundamentalist—no piano playing on Sunday, no wearing of lipstick or earrings—Maria is a free spirit. She questions the religious dogma that her father drones out every Sunday, regarding the "640 hours" she's spent in confirmation

class as a waste of time.

She is also dealing with her blooming sexuality, occasionally experimenting with lipstick, stuffing her bra, going to hangout spots where the teens of the town smoke cigarettes and feel each other up. In this she is encouraged by Mrs. Tunheim, secretary of her father's church, and one of the few fellow rebels in their staid, dull town. Eventually Maria finds out that Mrs. Tunheim has a secret.