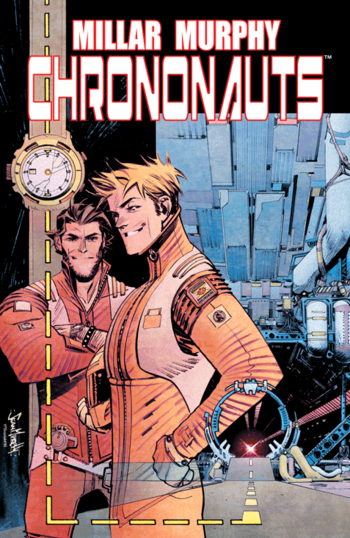 After discovering a fighter jet within a temple whose construction date surpasses that of Stonehenge, Corbin Quinn and Danny Reilly use this discovery to perfect their dream project: a working time machine. After months of research, they succeed in their efforts, making history, literally.

Following a successful test that brought back high quality footage from the American Civil War, Quinn and Reilly go ahead with a manned flight, with themselves as the first time-travelers. Crafting "chronosuits" using the same design as their time portal, Quinn and Reilly prepare to go back in time. Expectedly, things go wrong and Quinn is seemingly lost. Reilly, loyal friend that he is, jumps into the portal to save his pal, only to find an anachronistic mess of a time period where Quinn is king.

The two then decide to give the timestream the middle finger and Hilarity Ensues.

Chrononauts is a four-issue Science Fiction Action-Comedy comic miniseries written by Mark Millar and illustrated by Sean Murphy. If you haven't guessed yet, the series decides to forgo the usual worries about time travel paradoxes and decides to have fun with the fact that the main characters have time machines.

The series was followed by Chrononauts: Futureshock, another miniseries published late 2019.