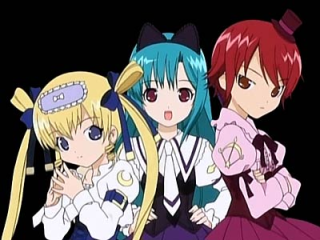 Kotono Hayama is a young girl who lives with Joshua in a church. She and her best friend/admirer, the wealthy Natsuki Shirafuji, help out at the Kuroki Detective Agency. Their story begins with children being kidnapped, with a certain boy, Ewan, being the culprit. Kotono befriends him, and he bestows upon her the power to transform into a Magical Girl.

As it turns out, the Reverse Corporation, a nefarious group of tarot card users, has been scouting out Arcana City to find Ewan for their boss, President Kurtz. Kotono, Natsuki, and a strange newcomer named Misaki Hijiri form the Goth Loli Detective Agency to solve the city's problems as Black Loli, White Loli and Red Loli.

Saint October was an Anime First series by Konami, airing for 26 episodes from January to June of 2007.

Tropes in Saint October include: