"Thousands of light years in the future, when the gigantic dragon that was born and lives in a sea of flames awakens... ...an insane force will appear and Heaven and Earth will be swallowed up in darkness." 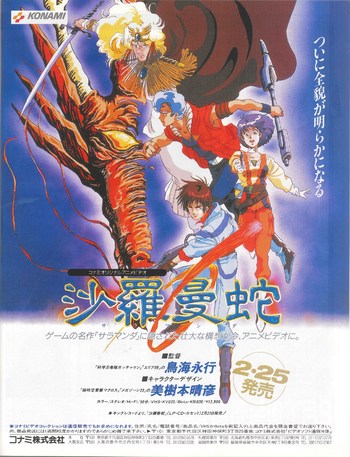 Salamander is a three-part OVA miniseries based on the Gradius series, created by PonyCanyon and Konami in 1988 on VHS and Laserdisc formats. The series focuses on the adventures of Gradius military pilots Stephanie, Dan and Eddy as they team up with the prince of Planet Latis, Lord British, to combat a mysterious but deadly bioform known as Bacterion, which threatens both of their worlds.

Unfortunately, the OVA never found its way outside of Japan, and actual hard copies of it are very hard to come by. Also, despite the name, the miniseries is actually an adaptation of all three Gradius games at the time, not just Salamander alone.

Basic summaries of each episode are as follows:

Shortly after being told about an ancient statue in orbit above Latis, Lord British discovers an identical statue on the surface, directly where he plans to build a temple. Disregarding all warnings to leave it alone, he inadvertently invites a deadly lifeform known as Bacterion to attack the planet and wreak havoc with its weather. Reluctantly, he is forced to seek assistance from rival planet Gradius in the form of three pilots - Dan, Stephanie, and Eddy - who have dealt with the threat before and suggest that a large dragon in the center of a planetary fortress controls the invaders. In order to save Latis, however, Lord British must find within himself to humility to cooperate with the pilots and not ignore their advice.

'Part 2 - Salamander: Meditating Paola' (an adaptation of Gradius and SARAMANDA-: Meisou no PAORA)

A prequel to part 1, explaining how Gradius first came into contact with Bacterion. After the elected leader of the planet goes missing, his daughter Stephanie investigates a strange space wreck alongside Dan and Eddy. Inside they find a beautiful woman named Paola, who claims to be the ship's sole survivor and warns the Gradian military about the Bacterion threat. Although Eddie trusts her and believes her psychic meditation to be of great help, Dan and Stephanie are less trustworthy of the woman, whose home planet has transformed into a bizarre, nightmarish landscape of what appear to be flesh and organs, aggressively steering itself toward Gradius.

Some time after Part 1, Lord British visits Gradius to sign a historic peace treaty, as well as hopefully confess his love to Stephanie and marry her. However, events take a dark turn when a dragon made of flames appears to kidnap her and take her to a strange star. When investigations reveal that the star appears to be housing Bacterion ships, Gradian brass correctly hypothesize that the star is a disguised fortress, akin to a planet turned inside out. Inside the star, Stephanie recalls the truth behind Bacterion biology and discovers that they intend to process her mind into a behemoth known as Gofer and wipe out all other life in the universe. Lord British is convinced that he must be the one to save her, and pleads to accompany Dan on a rescue mission... if they can just find a way to safely enter the star.

While the arcade games did not have much of a plot, the anime adaptation still manages to steer wildly away from them, incorporating signature elements from each game in strange, amalgamated, yet refreshing ways which focus on actual characters in addition to tense space battles. Also, notably, this was among Konami's first ventures into the OVA format (and not the last to feature Vic Viper, either.) They are completely different from the stories of the MSX games Gradius 2 (1987), Salamander (1987) and Gradius - Gofer no Yabou - Episode II (1988), a sequel to arcade's Gradius II - Gofer no Yabou (Gofer's Ambition, 1988).

The star fighters are also different from the games. For example, the Vic Viper model has a single fin design in the games, while the ships sport double fins on the OVA. Lord British has single fin and single front edge, just like in the games. The double fin design of the Vic Vipers on the OVA is from the Alpine model, which appears much later on arcade's 3D game Solar Assault Gradius (1997). MSX's Gradius 2 starfighter Metalion had two fins, but single front edges instead.

The Salamander OVA contains examples of: