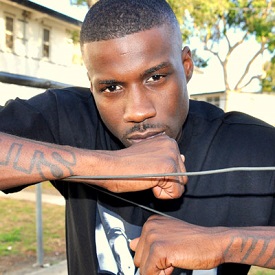 "You ain't gotta like it, 'cause the hood gon' love it."
Advertisement:

Johnny Reed McKinzie, Jr. (born March 31, 1986), a.k.a. Jay Rock, is a hip-hop artist from the LA community of Watts. Jay Rock is a member of Top Dawg Entertainment alongside such fellow rappers as Kendrick Lamar, Ab Soul, and ScHoolboy Q, with whom he formed the rap group Black Hippy.

In 2008, Jay Rock released his debut single "All My Life (In the Ghetto)" featuring Lil Wayne. The track earned him significant buzz, and after some delays he released his first studio album Follow Me Home in 2011.

Tropes applicable to Jay Rock include: