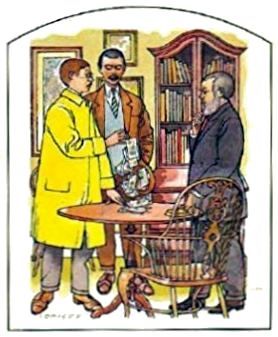 Stanley Featherstonehaugh Ukridge is a character created by P. G. Wodehouse. His defining feature is his endless supply of dubious Get Rich Quick Schemes, which he pursues with great energy, optimism, and creativity. He's not above bending the truth a bit, and he's rather free with other people's property, but he'd never think of himself as a con-man — all he's asking is that people show a bit of broad-minded flexibility until he can pay them back.
Advertisement:

Ukridge's friends and relatives, on whose strained generosity Ukridge is typically reliant, end up participating in his schemes whether they like it or not. First among them is James "Corky" Corcoran, an old school friend who is more-or-less resigned to being Ukridge's favoured draftee. A struggling author, he narrates (or at least introduces) most of the Ukridge stories, even if Ukridge has most of the dialogue. Other recurring characters include the duo's classmate George Tupper, who has become successful in government service, Ukridge's rich Aunt Julia (an iron-willed authoress of some renown) and the boxer "Battling" Billson.

Ukridge is actually Wodehouse's longest-lasting character — he pre-dates the more famous Jeeves and Wooster and Blandings Castle stories, and continued to make occasional appearances as late as the 1960s. In total, there are twenty stories featuring him — one novel (his first appearance) and nineteen short stories. The latter were originally published in magazines, but have all since been republished in books — the first ten are collected in Ukridge and the others are mixed with non-Ukridge stories elsewhere. Each story is mostly self-contained, although some feature recurring characters and make references to past events. To the extent that they have an internal chronology, it differs from their publication order.