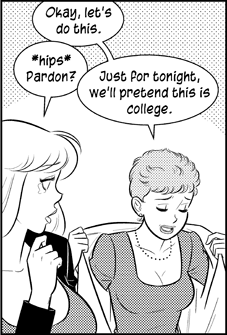 With side-orders of Experimented in College and If It's You, It's Okay.
Alice is not normally attracted to Bob/Roberta, but because she feels sorry for him/her, she sleeps with him. May or may not be Played for Laughs. More likely to happen if the one who takes pity is an Ethical Slut. Could lead to a Friends with Benefits situation if things go betterthan expected. Another version of the trope plays out when a prostitute is hired for the lonely pal out of similar motives (pity sex by proxy). The G-rated version would be the Pity Makeout.
Advertisement:

Usually establishes the one being taken pity on as something of a loser, while portraying the one taking pity in a positive light (especially in the by-proxy examples). Usually tends to be a once-off event rather than an on-going relationship, so do not expect a Relationship Upgrade to take place. Can also be used to establish the sexual mores of the characters by showing pity as enough of a reason to have sex, so one of the characters could be an Ethical Slut, Good Bad Girl or a Chivalrous Pervert. If this is something that is normal in a society, or not out of place, maybe the setting is a Free-Love Future. Might be prefaced by someone invoking You Need to Get Laid, especially in the by proxy version of the trope. Compare or Contrast Sex for Solace, a type of Pity Sex that deals with emotional trauma from a tragedy.

I can make this real fast

After Blitzo is tempted into sleeping with Stolas, he says that he can do it "Real Fast." It then cuts to the next morning, showing that they fucked all day.

I can make this real fast

After Blitzo is tempted into sleeping with Stolas, he says that he can do it "Real Fast." It then cuts to the next morning, showing that they fucked all day.