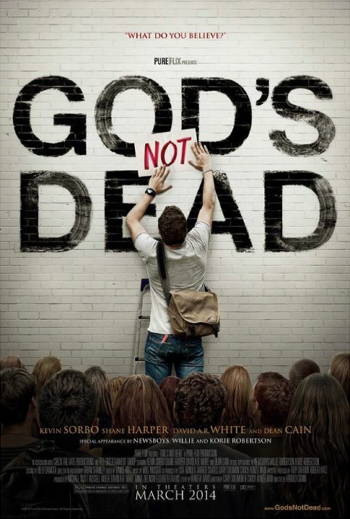 What do you believe?
Advertisement:

God's Not Dead is a 2014 Pure Flix Entertainment movie about Josh, a Christian college student who has joined a philosophy class with the firmly atheist Professor Radisson. Radisson demands the students write out the words "God is dead" with their signature to get a passing grade. When Josh refuses, he offers him the chance to debate it, and is determined to humiliate him.

There are a few sub-plots, too, such as: an Arab-American girl named Ayisha, who is afraid of her Christian faith being discovered by her father; a pair of missionaries suffering chronic car issues; Amy Ryan, an atheist blogger who discovers she has cancer; and the girlfriend of Radisson, whose faith drives a wedge in their relationship.

Compare and contrast with The Ledge, the polar opposite ideological equivalent film.

God's Not Dead provides examples of: