Film / The Fundamentals of Caring 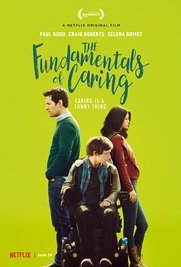 A writer (Paul Rudd) retires after a personal tragedy and becomes a disabled teen's caregiver. When the two embark on an impromptu road trip, their ability to cope is tested as they start to understand the importance of hope and friendship in this 2016 Dramedy. Base on a novel call “ The Revised Fundamentals of Caregiving”, by Jonathan Evison.

The Fundamentals of Caring contains examples of: