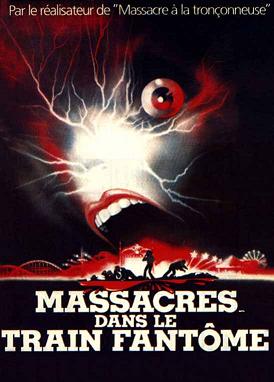 Pay to get in. Pray to get out.
Advertisement:

The carnival has come to town!

Four teens (Amy, Buzz, Richie and Liz) are having a double date and decide to visit the travelling carnival. After seeing the usual attractions, they smoke some dope and have the bright idea to stay in the funhouse after the carnival's closing.

While making out in the hiding, they accidentally witness the funhouse barker's son Gunther strangling the carnival's fortune teller because he's not pleased with her...erm..."services". Soon enough they find out that they are locked inside and — due to Richie's stupid idea to steal the funhouse barker's money — Gunther and his father are now hunting them down.

And that's Tobe Hooper'snote also the director of The Texas Chain Saw Massacre (1974) and Poltergeist 1981 Slasher Movie The Funhouse. It has your typical Slasher conventions: Stupid teens, plenty of Fanservice and a deformed albino killer so monstrous that he has three noses and red eyes.

Oh, and Dean Koontz wrote the novelization. More on that below.

Enter the funhouse, and you'll find:

The novelization based on the script (written by Dean Koontz under the pseudonym Owen West) was released in 1980. The reason it was released earlier is because the film's production took longer than expected.

It greatly expands the roles of Amy's mother Ellen and Conrad Straker, as it reveals that they were married twenty years ago. Overtly Christian Ellen killed their firstborn son Victor (as she believed that he was evil) and ran away. Conrad vows that he will kill her children if she ever again has any. He then uses his carnival job to lure in kids that he suspect are Ellen's and lets Gunther to kill them. Joey also gets an expanded role: Ellen's issues have driven him to run away with the carnival, and he is also hunted through the funhouse.Madame Zenda's role is also expanded, as she is Conrad's second ex-wife and helps Conrad to his targets. She also doesn't have sex with Gunther, as she's his mother.

Within the pages of the novelization there are: