Administrivia / Too Rare to Trope 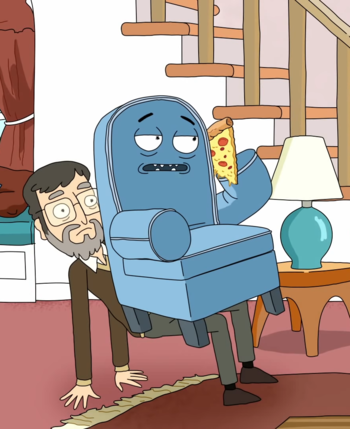 Also known as "Chairs Sit On People"... literally.
It's even more rare to use a slice of pizza as a phone to order phones to eat.note This does, however, fit tropes like Just the Introduction to the Opposites and Animate Inanimate Object.
This happens when a trope is so ridiculously specific that it would only really have an example from that one show, where it didn't have any real meaning anyway. So it's Not a Trope, but because it's too rare to have enough examples (at least at the moment).
Advertisement:

A very rare trope is still a trope, but, by definition, a trope still needs to represent some sort of meaningful pattern (as opposed to a coincidence). For an example, if a pattern is only visible in Ugandan literature in the 1970s, it's still a trope as long as it conveys some sort of message (even if that message is only understandable to readers of 1970s Ugandan literature), but a narrowly-defined TLP for which only two or three examples can be found is much more likely to be coincidences than those with a similar degree of specificity and many examples.

"Middle Child Hates Tomato Sauce And Loves Disco", for example, would not be a trope even if three examples of it could be found.

Sometimes, it can be combined with The Same, but More Specific, when an existing trope has a specification so rare, that it can't be tropable beyond a few existing examples. "Dropped a Bridge on Him, But On A Thursday", is an example.

This is related to People Sit on Chairs, where there may be enough instances to establish a pattern, but the pattern isn't meaningful enough to be a trope on its own. "People Cutting Their Fingers With An 80s Nail Clipper" is an example of something that's both People Sit on Chairs and Too Rare to Trope at the same time, as it's not specific-to-fiction, doesn't convey any meaning and has practically no examples to speak of.

If you're not sure whether your TLP falls into this category, try asking "Is This Tropable?"

There is a way for an occurrence that is Too Rare To Trope to appear non-coincidentally in more than one work, and that's deliberate Shout Outs. It's even possible for tropes to eventually coalesce out of such intertextual references, reaching a tipping point where a Trope Maker or Trope Codifier emerges, at which point something that was previously Too Rare To Trope retroactively becomes an example of an Unbuilt Trope.

Compare/contrast No Trope Is Too Common.