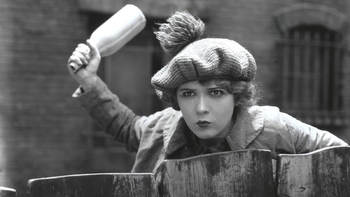 Annie Rooney (Pickford) is a spunky teen girl (Pickford was 34 years old) living in the slums of New York. Annie is a tomboy and leader of a gang of teens, who frequently engage in alley-wide brawls with a rival teen gang, the Kid Kellys. Annie isn't always a tomboy, though; she has a crush on Jack Kelly (Haines). Jack is the leader of the Big Kellys, a grown-up gang of petty criminals. Annie's brother Tim is a member of the Big Kellys, as their father is a policeman. Many wacky hijinks ensue as Annie engages in her high-spirited adventures and admires Jack from afar—until tragedy suddenly ensues.