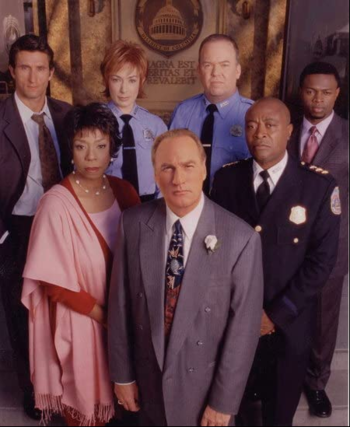 In the 2000-2004 TV series The District, the solution to Washington, D.C.'s high crime rate, one of the highest in the country in spite of up to 30 different agencies having some jurisdiction in the city, is to hire former New York Police Department officer and Newark (NJ) Police Department Chief Jack Mannion, played by Craig T. Nelson, to head and reorganize the Metro Police Department, with the idea that he could bring down DC's crime rate the way he did Newark's.

The series is inspired by former NYPD Deputy Police Commissioner Jack Maple and his book The Crime Fighter (co-written with Chris Mitchel), which discusses his work in reorganizing the NYPD. Maple is given creator credits, but his involvement with the series was limited due to his death ten months after the show first aired.