Film / Magical Legend of the Leprechauns 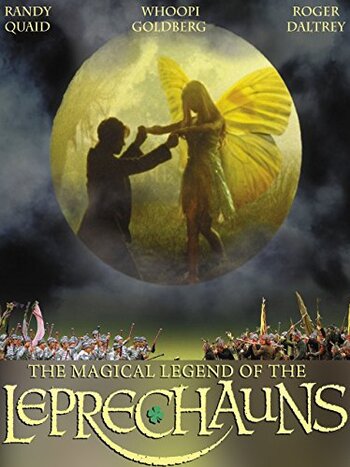 A 1999 two-part Made-for-TV Movie by Hallmark, about two couples who are dealing with very different romantic strife and yet have a large amount of impact on the others' stories.The first couple is a man from New York (Randy Quaid), employed by a developer company to look for land in Ireland to use for resorts, and Kathleen, the plucky (and surprisingly not redheaded!) Irish woman he meets there.

The second couple is a leprechaun named Mickey and a trooping fairy named Jessica, whose newfound love for each other is challenged by long-running blood feuds between their species. Their side of the story is essentially a Lighter and Fluffier retelling of Romeo and Juliet, but as a whole this film is not as Light and Fluffy as it sounds.