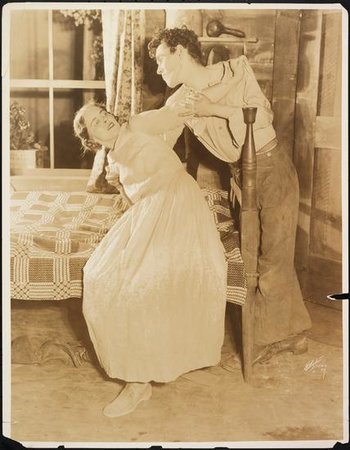 Rufe and Jude (from the 1924 production)
Advertisement:

Hell-Bent Fer Heaven is a 1924 play by Hatcher Hughes.

It is set at the home and general store owned by the Hunt family, who live in the Blue Ridge Mountains of North Carolina. The play is set immediately after the end of the Great War, and it opens with the Hunts eagerly greeting their son Sid, who has returned from service in France. Also glad to see Sid home are pretty Jude Lowry and her brother Andy. The Lowrys and the Hunts engaged in a violent feud years ago, but all that is forgotten and they are now friends. In fact, Jude Lowry and Sid Hunt are in love and intend to marry.

The one person who isn't happy to see Sid come home is Rufe Pryor, a local man who works as a clerk in the Hunt store. Rufe has fallen in love with Jude and is intensely jealous of Sid. Rufe has also gotten religion and is pretty intense about it, much to the irritation of his acquaintances. His jealousy and his religious fervor make for an unfortunate combination.

Clara Blandick, who played Sid's mother Meg in this production, later appeared as Aunt Em in The Wizard of Oz.