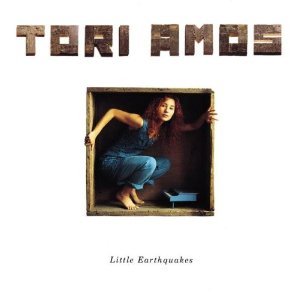 She's been everybody else's girl, maybe one day she'll be her own.
"Why do we
Crucify ourselves
Every day?
I crucify myself"
—"Crucify"
Advertisement:

Little Earthquakes is the debut studio album by Tori Amos, released in 1992. It is often considered to be one of the most important musical albums by a female artist ever. Prolific in Alternative Rock and Baroque Pop "Little Earthquakes" has received a lot of acclaim and garnered hits with "Crucify", "Silent All These Years" and "Winter". While it only peaked at no. 54 on the Billboard album chart, it would sell over two million copies in the U.S. alone by 1999 and remains Amos' most popular album.

For Amos, this was the album that put her back on the map after her last album she made with a band, Y Kant Tori Read. It also saw her returning to her roots as a pianist. When she first submitted the album to her record company, they didn't like it and made her record more songs. Then they wanted to remove some songs from her soon-to-be debut. This is one of those cases where the executives unknowingly helped, since the second batch of songs Tori recorded were fan favourites "Girl", "Precious Things" and the eponymous "Little Earthquakes". They also wanted to replace the piano with guitars, since Grunge was popular at the time. Fortunately, Tori didn't let that happen.

Silent All These Tropes: