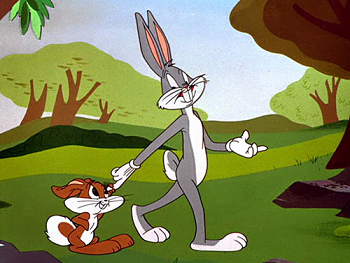 In fiction, often, adult Funny Animals will be shown looking considerably more anthropomorphic than child ones. Their own offspring might even look like Nearly Normal Animals. Once they grow up, they suddenly start looking more humanoid than they did as children.

This could be a way of invoking a Furry Reminder but can create Furry Confusion instead. Many times this is a way of emulating human children, who lack several sexual characteristics until puberty and are born with no ability to walk or talk. The idea, then, is that these animal characters will eventually grow into an anthropomorphic form as they mature.

Compare Humanoid Female Animal, a similar distinction based on gender rather than age, and Bishōnen Line, when becoming more humanoid in shape is tied to Power Levels rather than age. See also Humanlike Animal Aging, Anthropomorphic Shift, Appropriate Animal Attire, and Metamorphosis. Can result in Furry Confusion.