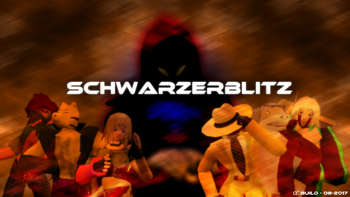 Schwarzerblitz (almost German: Black Lightning) is a 3D indie Fighting Game inspired by arcade games from the '90s, like Tekken or Virtua Fighter, created by Andrea "Jens" Demetrio. Word of God says that the game is set in the same universe as Distortionverse, which is somewhat understandable since we are talking about the same author and there are some recurring characters in both works.

As its parent series, Schwarzerblitz is set 20 Minutes into the Future, in a sort of Crapsack World where the entire Fennoscandia has sunk into the depths of the Northern Sea, most of Ireland has been invaded by blood-sucking creatures, and seeing mutants and aliens around the streets in the U.K. is just everyday routine.

The plot of the game revolves around the so-called Black Lightning Disaster, which obliterated Italian capitol city Euterpe in 2064, and on how the various character are related to the accident.The cast of playable characters features some regular humans, a man without a face,a sadistic killer robot, a drunken Shark Man, and even a Raptor with a minigun, among the others.

is available for free on GameJolt or Steam

. And you can join the Discord Server

for more discussion on the game. The game is completely in English.