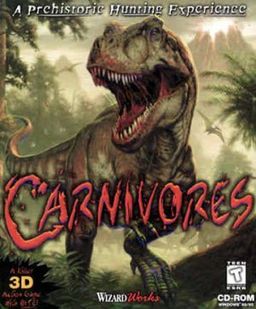 The creature on this image is one of, if not the, most dangerous T. rex in gaming history.
"2190AD. On a routine exploration, science vessel FMM UV discovered a planet with a suitable climate for humankind. During the initial scouting expedition this young planet, code-named FMM UV-32, was declared inhospitable for colony life due to its unstable terrain and immense population of prehistoric reptiles. News of this amazing planet spread and articles on the "Dinosaur Planet" lead an Earth corporation to purchase the rights to the planet, and create DinoHunt Corp. DinoHunt created the unique opportunity for paying customers to become dinosaur hunters for the first time in 50 million years.
Advertisement:
You are the newest client of DinoHunt Corp."
—The introduction to Carnivore's user's manual

Carnivores is a 1998 First-Person Shooter/Hunting Game where you, the player, get to be an Egomaniac Hunter on a quest to kill "prehistoric reptiles" on the alien planet of FMM UV-32. However, the game is not a generic Deer Hunter clone. No, you are not an invincible god able to slaughter your foes in droves. You are being hunted as much as you are hunting, and your foe is bigger, faster, stronger, and, occasionally, smarter than you. Can you survive?

Carnivores spawned two sequels: Carnivores 2, and Carnivores: Ice Age. Carnivores 2 is generally considered the best of the series, although all three are good in their own right. They boast impressive (for The '90s) graphics which include semi-realistic water effects and well-detailed environments, in addition to an incredible AI system for the dinosaurs, though it can be spotty at times. They were considered Abandonware for a long time, until in 2010 they ported the games onto iPod (or at least, Carnivores 2 and Ice Age) as well as the PSP. There was also a PS3 game, Carnivores: Dinosaur Hunter HD, released in 2013. An improved and updated version of the PS3 game, Carnivores: Dinosaur Hunter Reborn, was released on Steam in May 2015, in spite of having a failed Kickstarter. Yet another updated version, Carnivores: Dinosaur Hunt, was released on June 1, 2021 for the Nintendo Switch, Playstation 4, and Xbox One, and is scheduled for a release on Steam in 2022.

If anyone asks, there was, in fact, a fourth game, entitled Carnivores: Cityscape. It turned the game into a full-out generic FPS based around a semi-recycled plot (from The Lost World: Jurassic Park; at least, the movie version). In it, DinoHunt Corp. is running out of clients; interest in the dinosaurs is waning, and most of the people who might have jumped at the chance to hunt prehistoric creatures are already dead because they tried and failed miserably. So they decide to bring some dinosaurs from FMM UV-32 to the people as a kind of traveling zoo. As can be expected, the dinosaurs escape into the city that the spaceship carrying them crashes in, and it's up to you (as an "Agent") to kill them, or, if playing as a dinosaur (the campaign has five missions for each), to kill the agents... or something.

It's not brought up in polite conversation with fans of the original series, and is generally considered So Okay, It's Average, though it has its share of fans. It was also the first (and, so far, only) game in the series with online capabilities.note The second game was planned to have online multiplayer, but the idea was scrapped in development.