Series / Clash of the Dinosaurs 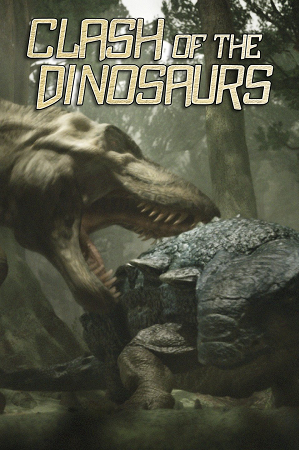 Clash of the Dinosaurs (2009) is one of Discovery Channel's many dinosaur-related documentaries. It was presented in a Mini Series format, and contained a grand total of four hour-long episodes. Each concentrated on different aspects of the dinosaur lifestyle, such as how they coped with environmental changes, how they hunted and defended themselves, and how they reproduced.

The show received notoriety even before its TV debut, thanks to the heavy advertising campaign the TV station gave it. When it finally aired, it quickly gained a bad reputation due to the several serious problems that plagued it. Besides its use of Stock Footage, Clash of the Dinosaurs infamously quote-mined paleontology expert Mathew Wedel who appeared on it, and presented wild (and sometimes even disproven) theories as solid facts. Thanks to these shortcomings, the program is nowadays considered by dinosaur fanatics to be one of the worst, if not the worst, dino-documentaries of recent times, and the offended scientist actually encouraged his fellow paleontologists to boycott the now-defunct production company

The series was followed by a special titled The Last Day of the Dinosaurs. This time, the producers told us their story of how these majestic creatures went extinct. This one had fewer problems.

A list of tropes that appear in the series: