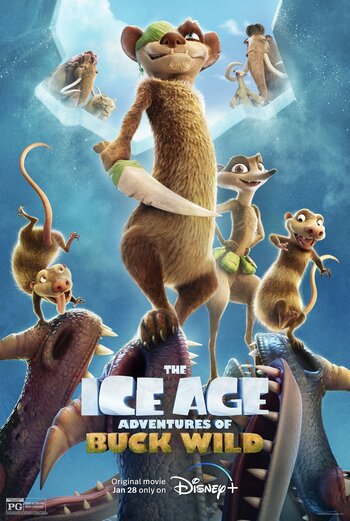 It's time to get wild... Buck Wild!
The Ice Age Adventures of Buck Wild is a spin-off and continuation of the Ice Age franchise, released exclusively to Disney+ on January 28, 2022. It is the first animated media in the series not produced by Blue Sky Studios (which was shuttered in 2021), with Bardel Entertainment instead handling animation production.
Advertisement:

Opossum brothers Crash and Eddie have begun to chafe living under the watchful eye of their adopted sister Ellie, and when they are told they wouldn’t survive living on their own, they take the plunge and go off on their own. They manage to fumble their way back into the lost world, and decide they want to live a life of adventure with their old friend Buck Wild (Simon Pegg). However, they learn that it’s a bad time to pay a visit, as a hyper-intelligent dinosaur named Orson has set his sights on conquering the lost world with a swelling army of dinosaurs at his command. Now Crash and Eddie must help Buck, and his old friend Zee, in stopping Orson’s mad plans for conquest, and maybe prove they can make it on their own in the process.