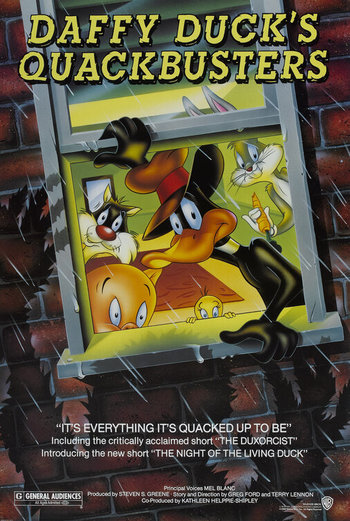 Daffy Duck's Quackbusters is a 1988 Compilation Movie starring Daffy Duck and other classic Looney Tunes characters. This film combines newly-animated footage linked with classic Warner Bros. cartoons. It is the last film in the Looney Tunes compilation movie anthology, as well as the only one to have an overarching story, and the last Looney Tunes theatrical feature until Space Jam eight years later. It was also Mel Blanc's second-to-last performance in a Looney Tunes project, with his absolute final one being the linking material in the TV special Bugs Bunny's Wild World of Sports a year later.

Here, Daffy Duck is a salesman who accepts a job to fulfill millionaire J.B. Cubish's wish to make him laugh one more time before he passes on. Daffy succeeds and when Cubish kicks the bucket, Daffy earns all his money from his will as long as he uses it for goodwill. But Daffy, well... being Daffy, plots to spend the money for himself, and so he's haunted by Cubish's ghost, who will gradually make his money disappear if Daffy doesn't provide a service to the community, or for that matter, does or says anything dishonest. As a result, Daffy decides to open a ghost exterminating business to get rid of ghosts like Cubish and hires Bugs Bunny and Porky Pig to help him.

"Night of the Living Duck" and "The Duxorcist" (the film's two new full cartoon segments) were later re-used in the 1992 TV special Bugs Bunny's Creature Features, while "The Duxorcist" would later join the Saturday morning rotation on ABC's Bugs Bunny & Tweety Show.

"The Night of the Living Duck" contains examples of:

The main film contains examples of: