Film / Gleahan and the Knaves of Industry 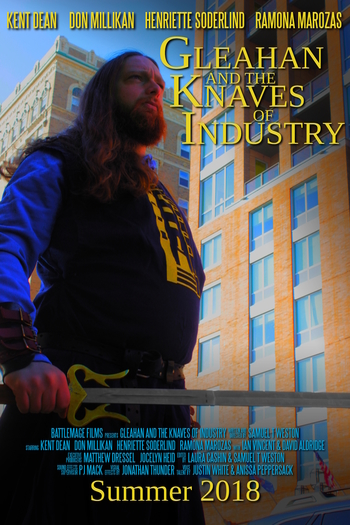 A Fantasy-infused Adventure Comedy if there ever was one.

Teenager: Dude! Did you fight any dragons with this thing?
Gleahan: I have vanquished many a dragon with this blade, but many more I've come to call friend.
Mark: Hey kids! Get away from that guy! He's probably got... rabies... or something.

Gleahan and the Knaves of Industry is the first feature film by Samuel T Weston. It premiered in the summer of 2018, but languished in Denial of Digital Distribution hell until the studio released a reworked Director's Cut in 2022.

The movie follows Mark, a down-on-his-luck but opportunistic asshole who's forced to start selling marijuana just to pay the bills. He's told right out the gate to "avoid the knight that's running around town." He then repeatedly runs into Gleahan of Eastvale, a delusional man who acts like he lives in a fantasy world.

Made in Duluth, Minnesota on virtually No Budget, Gleahan exists largely because the cast and crew thought the idea was Crazy Enough to Work and went along with it. In that light, the movie's production practically mirrors its own plot.

and the film is available on The Fantasy Network.

Tropes appearing in this ridiculous adventure include: