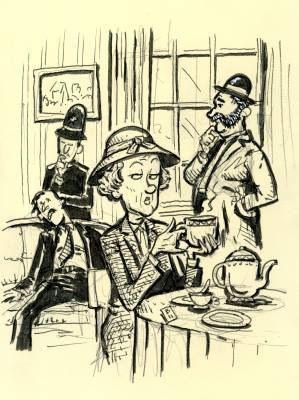 Cozy mysteries are considered "gentle" books, with no graphic violence, profanity, or explicit sex. Most often, the crime takes place off stage and death is usually very quick (usually by poisoning or being pushed out of a window). The victim is usually an Asshole Victim, and if there's more than one victim, they are usually connected, though the reader is not aware of the obvious connections until the amateur sleuth solves the crimes.

The crime-solver in a cozy mystery is usually a very intuitive, bright woman with a down-to-earth hobby or occupation, e.g. cooking, scrapbooking, knitting, painting, quilting, working in a teashop, etc. She may or may not be accompanied by a friendly dog or cat. Male crime-solvers in Cozy Mysteries aren't unheard of, but they are less common.

Cozy mystery series frequently have a prominent thematic element or Pun-Based Title introduced by the detective's job, pet, or hobby. There are also cozy mystery series with themes of Christmas, Easter, and other holidays.

The cozy mystery usually takes place in a small town or village, to make it believable that all the suspects know each other. The amateur sleuth is usually a very likable person who is able to get the community members to gossip about each other, and there is usually at least one very knowledgeable and nosy character who is able to fill in all of the blanks, thus enabling the amateur sleuth to solve the case.

Although the cozy mystery sleuth is usually not a medical examiner, detective, or police officer, a lot of times her best friend, husband, or significant other is, which enables her to find out things that she would otherwise not have access to. At the same time, the local police force doesn't take the amateur sleuth very seriously — which, of course, makes it convenient for her to "casually overhear" things at the scene of a crime.

The murderers in cozies are generally members of the community where the murder occurs and able to hide in plain sight, and their motives are often rooted in events years, or even generations, old. They are typically neither psychopaths nor serial killers, and are often rational and highly articulate, enabling them to explain their motives after their unmasking.

While cozy mysteries are usually set in a realistic setting, several cozy mystery series include paranormal elements, usually in the form of friendly ghosts who are willing to provide clues or otherwise help out the protagonists. In addition, some heroines are witches or psychics, who use their powers to help other people.

On occasion, the crime won't be Always Murder — sometimes the crime might actually be something different, but still something that will warrant explanation and detective work. Sometimes they may even be mundane things like family mysteries or framing. This is especially true in works targeted at younger audiences.