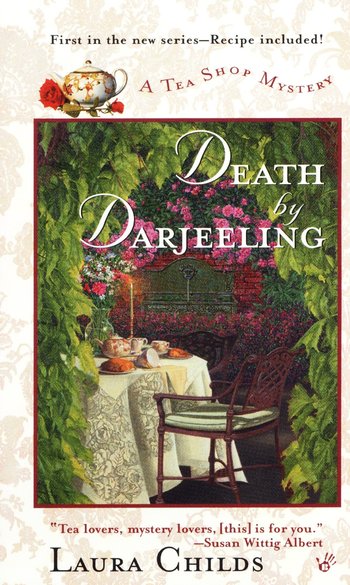 Would you like some Oolong to go with your detective story?
Theodosia: Well, I'm supposed to take Earl Grey to the O'Doud Senior Citizen Home tonight, attend a gallery opening with Delaine tomorrow night, and Wednesday is the big anniversary party at The Featherbed House, which, of course, we're all invited to. And now we're taping all day Thursday, and Saturday is Delaine's big Fashion Bash at the Garden Gate Restaurant. Trust me, I know Delaine's going to try to rope me in on something.
Advertisement:
Haley: You forgot one thing.
Theodosia: What's that?
Haley: You have to figure out who killed Harper Fisk.

Nestled within the historic district of Charleston, South Carolina, there is a small cafe called the Indigo Tea Shop. The owner is one Theodosia Browning, a middle-aged woman who used to work in the hectic business of marketing. Compared to her previous job, Theodosia much prefers the calm and steady pace that running a tea shop provides. To help keep the shop running smoothly, there's Drayton Conneley, the resident tea expert with a flair for showmanship, and Haley Parker, the young chef with an eye for fresh and delicious dishes.

It's a good thing she has such loyal friends and workers: the close knit community of Charleston harbors its own fair share of secrets and scandals. From a murdered real estate developer, to a stolen family heirloom, to a pile of human bones, Theodosia has to solve a variety of mysteries on top of running her own store. Thankfully for her, she forms an odd partnership with Detective Burt Tidwell, a former government agent who has the instincts of a bloodhound.

Along with her friends, Theodosia may just be able to keep Charleston's community from crumbling and even enjoy a cup of tea afterwards.

The Tea Shop Mysteries is a Cozy Mystery series written by Laura Childs. The series started in 2001 with new entries being published at least once per year.