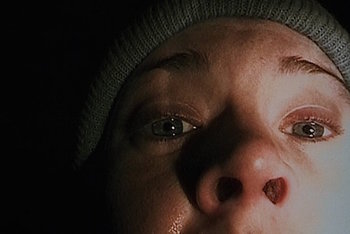 A close-up shot taken from a low position upward toward the actors, so as to flaunt their nostrils.

A classic example comes from The Blair Witch Project, spawning several parodies. If done well, it can be very creepy, but it has been mocked mercilessly ever since.