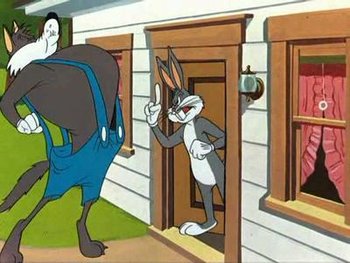 "Now just a minute, Doc!"
The Windblown Hare is a 1949 Looney Tunes cartoon starring Bugs Bunny. It was directed by Robert McKimson.

After reading their own story, the Three Little Pigs decide to sell their straw and stick houses before the Big Bad Wolf blows them down, with Bugs being the unfortunate buyer. When the Wolf blows the houses down, Bugs retaliates in his usual manner, until he learns that both he and the Wolf have been had. The Pigs don't laugh for long.