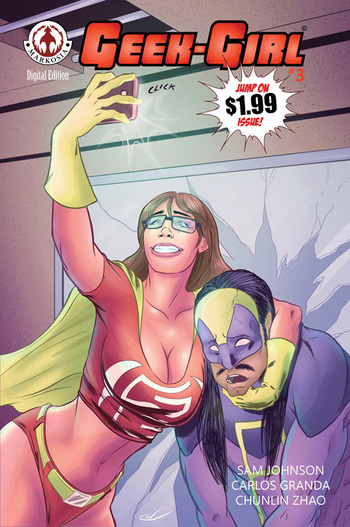 Set in the US state of Maine, the titular superheroine is a college girl named Ruby Kaye who ends up winning a pair of technologically enhanced eyeglasses from an inventor in a strip poker game. Skeptical of the inventor's claims of the glasses endowing its wearer with superpowers, Ruby tries on the glasses and find that they do indeed work. She even punches out an attacker with her newfound strength. With the help of her fashion designer friend, Summer, Ruby gets a costume and becomes the superheroine "Geek Girl".

Geek Girl is later out on patrol when she encounters one of Maine's resident superheroes, Neon Girl, battling the enigmatic villainess Lightning Storm. Lightning Storm ends up beating Neon Girl so badly that the latter gets hospitalized. Geek Girl then gets charged with finding and stopping Lightning Storm. And the adventures go on from there, with Geek Girl adjusting to her abilities and dealing with a variety of rogues.

This comic book contains examples of the following tropes: