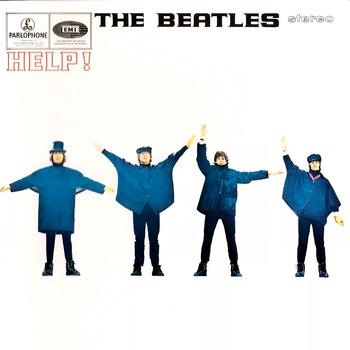 "Yesterday, all my troubles seemed so far away..." 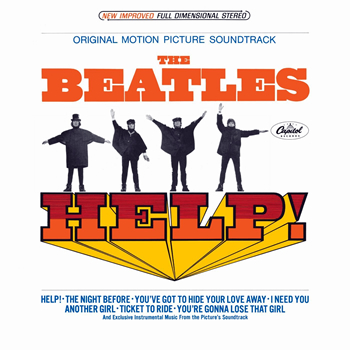 The alternate album cover for Help!, used in the US.
Advertisement:

Help! is the fifth studio album by The Beatles, released in 1965. Like their earlier album A Hard Day's Night it served as a sort of soundtrack to the movie of the same name. It would also be their final studio album until Let It Be to feature any covers.

Interestingly, the album cover with the Beatles using flag semaphore to spell "HELP" is inaccurate. It instead spells "NUJV". According to cover photographer Robert Freeman, this inaccuracy was intentional as it turned out that the "HELP" arrangement didn't look good enough. On the US version of the album, it was changed to "NVUJ."

It would spawn hits such as "Help!", "You've Got to Hide Your Love Away", "Ticket to Ride", and "Yesterday", one of the most recorded songs of all time.note Guinness World Records once claimed it to be the single most recorded song, with upwards of 2,000 versions, but Wikipedia points out that there are at least 20,000 known versions of "Summertime", and no doubt there are other Tin Pan Alley standards that meet or exceed that number. "White Christmas" is probably a strong contender for the title

A notable point of trivia regarding this album is that footage of the Beatles performing "Ticket to Ride" was included in the 1965 Doctor Who serial "The Chase", during a sequence at the beginning of the story in which the Doctor and his companions use a "Time-Space Visualiser" to view multiple anecdotal events from Earth's past, including the Fab Four on Top of the Pops. Incidentally, the footage included in the former show is the only surviving visual record that the Beatles were ever on the latter; the BBC had a policy of wiping old episodes for reuse due to a combination of limited storage space, high prices of new magnetic tape reels, and high re-airing fees imposed by acting unions at the time, and both Top of the Pops and Doctor Who fell victim to this practice. However, when the BBC abandoned systemic wiping for Doctor Who in 1974 and for all of their programmes altogether in 1978, staff scrambled to recover lost episodes of Doctor Who; "The Chase" was one serial that managed to be recovered in its entirety, and with it the only remaining footage of the Beatles on Top of the Pops. Ah, the perils of archiving.

* From the film score by Ken Thorne

She's got a ticket to trope, and she don't care: