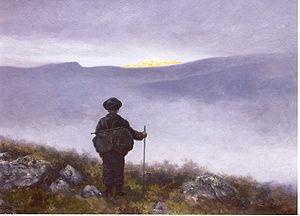 A couple had a useless son named Halvor who would just grope about in the ashes; when they bound him out, he only lasted a day or two. Then a skipper invited him on board and he went. A storm carried them off to a far land, where Halvor went to look about. It was a beautiful land but no one could be seen. Finally, he reached a castle where a princess warned him of the troll, but fed him, had him try a sword on the wall, and gave him a potion the troll used when he lifted the sword. When the troll came, Halvor cut off all three of its heads. She asked him to help her sisters, and he did so, even though they were prisoners of a troll with six heads and a troll with nine heads. He chooses the youngest of them for his bride.

After a time, he wants to see his parents, so they give him a magical ring to wish himself there and back, but warn him not to mention them. He went back and bragged of them. They appeared before them all, but then took the ring and went back without him. He set out to find the castle again. He meets up with an old woman who kept the Moon's house, and the Moon did not know, but the old woman traded him boots "with which you can take twenty miles at each stride" for his horse and sent him off to the West Wind, which led him to the castle, where the princess was marrying again. He used the ring the princess had left with him to reveal himself, and the princess married him and not her new bridegroom.

. Compare East of the Sun and West of the Moon, The Feather of Finist the Falcon, Pintosmalto, and The Blue Mountains.