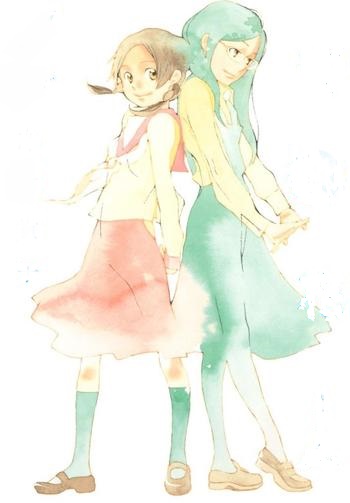 Sweet Blue Flowers (or Aoi Hana) is a Manga by Takako Shimura (the creator of Wandering Son) about girls in love with other girls. The manga ran in Manga Erotics F from 2004 to 2013. An anime adaptation debuted July 2009. The anime was licensed by Lucky Penny Entertainment in July 2012 and released in the US as a complete series DVD set on February 2013.

Sweet Blue Flowers eschews both silliness and overt melodrama and instead settles on Slice of Life. The story initially focuses on four high school girls:

The plot begins with Fumi and Akira meeting each other after many years apart, and going to their first day of high school together.

Fumi is driven to tears by Chizu already having a husband.

Fumi is driven to tears by Chizu already having a husband.