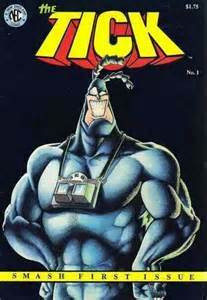 In 1986, eighteen year old cartoonist Ben Edlund created The Tick as a mascot for a newsletter of the Norwood, Massachusetts store New England Comics. Edlund expanded this into stories, beginning with the three-page Origin Story The Tick in New England Comics Newsletter #14–15 (July/August – September/October 1986), in which the eccentric hero escaped from a mental institution.
Advertisement:

In June 1988, it was released in an independent, recurring black-and-white comic series. Arthur was introduced in The Tick #4 (April 1989). Edlund would ultimately pen 12 issues, with the last one ending on a Cliffhanger. New England Comics Press went on to publish several comic series featuring the characters with varying creative teams. They transitioned to color in 2001.

The comic became popular enough to spin off three TV series, one animated and two live-action.

The comic series provides examples of the following: