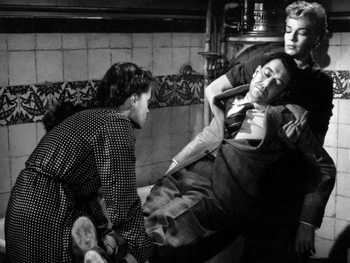 Les Diaboliques ("The Devils"), also known as Diabolique, is a French suspense-thriller made in 1955 and directed by Henri-Georges Clouzot, adapted from the 1952 novel Celle qui n'était plus ("She who was no more") by Pierre Boileau and Thomas Narcejac.

The story takes place at a run-down boys' boarding school. Christina (Véra Clouzot) and Nicole (Simone Signoret), respectively the wife and mistress of the school's Jerkass headmaster Michel (Paul Meurisse), conspire to murder him. However, after they carry out the deed, his body disappears, and then things just get weirder.

Rumpled, folksy detective Fichet, played by Charles Vanel, was the inspiration for Columbo.

Remade in the U.S. twice, first as the 1974 Made-for-TV Movie Reflections of Murder (starring Joan Hackett as the wife, Tuesday Weld as the mistress, and Sam Waterston as the brutish husband) and then again as the 1996 theatrical film Diabolique (starring Isabelle Adjani as the wife, Sharon Stone as the mistress, Chazz Palminteri as the husband, and Kathy Bates in a Gender Flip role as the detective).

Alfred Hitchcock was impressed enough to acquire the rights to another Boileau/Narcejac novel and turn it into Vertigo, and he later cited Les Diaboliques as a big influence on Psycho. Deathtrap was also a Spiritual Successor.