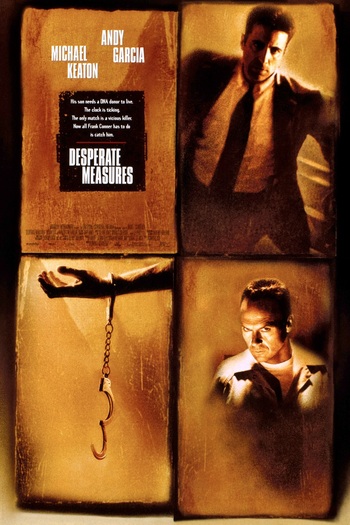 Desperate Measures is a 1998 American action thriller film adapted by David Klass from his own novel of the same name, directed by Barbet Schroeder and starring Michael Keaton and Andy García.

San Fransisco police officer Frank Conner (Garcia) is trying to locate a bone marrow donor for his son Matt, who has leukemia. He discovers a compatible donor in an imprisoned criminal named Peter McCabe (Keaton), and must convince him to donate his bone marrow. McCabe, who is deemed a dangerous sociopath, takes very little convincing to go along with Frank's request. McCabe has his own plan to escape which he pursues ruthlessly, and it's up to Frank to chase him down in time to save his son's life.