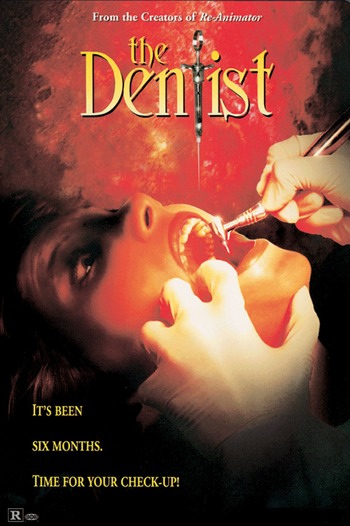 You know the drill.
"I am an instrument of perfection and hygiene. The enemy of decay and corruption. A dentist. And I have a lot of work to do."
— Dr. Feinstone
Advertisement:

The Dentist is a 1996 American horror film directed by Brian Yuzna and written by Dennis Paoli and Stuart Gordon (the team responsible for Re-Animator a decade earlier), inspired by the story of real-life dentist and serial killer Glennon Engleman. It stars Corbin Bernsen, Linda Hoffman, Earl Boen, Ken Foree, and Mark Ruffalo in an early role.

Dr. Alan Feinstone (Bernsen) has everything: a nice house, a beautiful wife, and a popular reputation as the neighborhood dentist. Everything is tidy and clean, just as it should be. But things start to go very wrong when, on the day of his wedding anniversary, Feinstone spots his wife having sex with the poolman. His world shaken to its core, Feinstone begins hallucinating at work, first believing that one of his patients has a mouthful of brown, rotting teeth, then that another is his unfaithful wife. Now he's about to become every dental patient's worst nightmare...

The Dentist was followed by The Dentist 2: Brace Yourself in 1998, also starring Corbin Bernsen as the eponymous doctor.