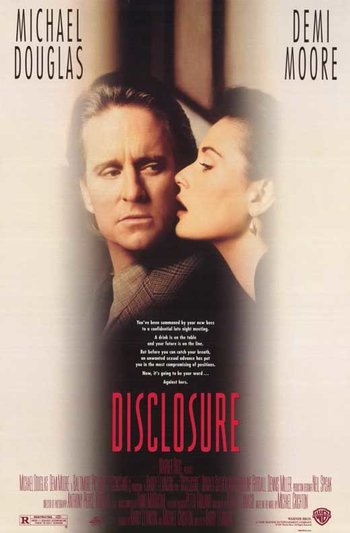 Disclosure is a 1994 thriller film, directed by Barry Levinson and based on a novel by Michael Crichton. The main stars were Michael Douglas and Demi Moore.

Tom Sanders (Douglas) is a software executive who has a perfect life. That is until it is ruined upon the arrival of his former girlfriend, Meredith Johnson (Moore). Meredith happens to be his new boss and a lover from a long time ago. She decides its an opportunity to rekindle their sexual relationship and is rather aggressive about it. Since he considers himself happily married he refuses.

The following day, Meredith files charges of sexual harassment against him. Nobody believes in his innocence, neither his family, nor his colleagues. His only hope is his new attorney Catherine Alvarez (Roma Maffia), who specializes in sexual harassment cases where men are the victims. He has little problem of settling out of court, only to learn the company has been looking for a scapegoat for some recent problems with the quality of their products. With all the attention to his name, it seems Tom has just volunteered for the job.