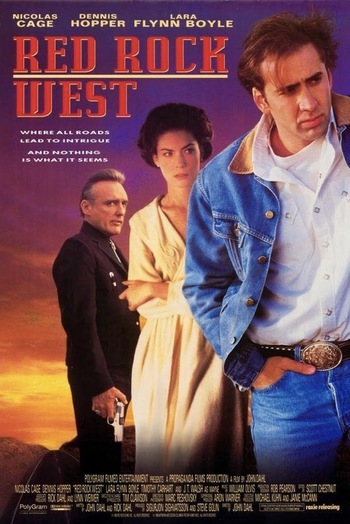 Michael Williams (Cage) is a drifter living out of his car after being discharged from the Marine Corps. After failing to get work at a construction job, Michael happens into a bar in Red Rock, Wyoming. The bartender (J. T. Walsh) mistakes him for a "Lyle from Dallas" that he was waiting on and, desperate for work, Michael decides to play along. Then it turns out the job is to kill the bartender's wife (Boyle).

Things go From Bad to Worse when the real Lyle (Hopper) shows up.

A mix between New Old West and neo-Noir, the film was well-received at festival screenings, but the rights holders deemed it not marketable for film release and released strictly on cable and Direct to Video. Despite its poor release, it did surprisingly well in local art house circuits, gaining a small reputation as a Cult Classic.