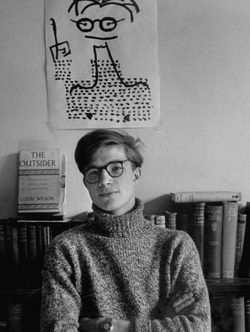 Colin Henry Wilson (26 June 1931 – 5 December 2013) was an English writer of fiction and non-fiction books in many genres - philosophy, literary criticism, science-fiction, fantasy, horror and the occult. He came to fame and some notoriety in 1956 with his first book, The Outsider, which explored themes of alienation and anomie in nineteenth and twentieth century writing, as well as exploring the lives and motivations of some of the people who wrote it. This propelled him to overnight fame as one of the "Angry Young Men" who were being lauded at the time by some of the British intelligensia (others included the playwright John Osbourne and the novelist Kingsley Amis). The fact he had written the book without having gone to university and whilst living rough on Hampstead Heath to save money were newsworthy hooks the media exploited. The fact his lover's father turned up one day, and had to be physically restrained from going for Wilson with a horsewhip, only fuelled the flames.

In later years Wilson became interested in parascience and the occult, and wrote a series of decidedly Fortean anthologies of anomalous and strange things inexplicable by current science. He theorised that the unifying feature for all these manifestations was the largely unexplored higher potential of the human mind, a concept for which he coined the phrase Faculty X. Wilson has also written some works of criminology, including an analysis of the Moors Murderers, and several explorations of violent and sexual crime, of which Order of Assassins is a typical example. He has also written for magazines including Fortean Times.

Wilson died on December 13th, 2013, at home in Cornwall. He had been ill for some time following a series of strokes.

Works by Colin Wilson include:

The life and works of Colin Wilson demonstrate examples of these tropes:-